Newland raise the bar in fast and accurate scanning with the HR52 Bonito.

Newland have announced the latest edition to their handheld scanner ranger; the HR52 Bonito.  With this series of scanner, they have advanced scanning speed and accuracy to a whole new level.

This megapixel scanner not only reads at an incredibly fast rate, but it is capable of reading codes that are creased, damaged or even covered in cellophane.  This is invaluable for busy retail point of sale applications.

Additionally, the HR52 Bonito is equipped with a cross laser aimer, making ‘point and shoot’ scanning easy and precise, even for users less familiar with barcode scanning or in a warehouse where boxes, products and barcodes are in close proximity to each other.  This is achieved thanks to Newland’s new Acuscan technology being able to distinguish where the centre of the laser aimer will hit and therefore it will not scan until the cross of the laser aimer actually touches the barcode.

This advanced scanning technology is well protected by IP54 housing and can withstand accidental bumps and knocks or even a drop from 1.8m.  This rugged exterior makes it a perfect solution for retail warehouses or more demanding POS applications, such as hardware or wholesale stores.

Its versatility doesn’t stop there, as well as point and shoot scanning, the device has been specifically designed in two editions; the Logistics Edition is a cordless version that connects via Bluetooth 5.0, which can even be mounted vertically, horizontally or strung from the ceiling for easy access. With a depth of up to 280mm, it’s scanning range is ideal for warehousing and manufacturing.

For the retail market, the HR52 Bonito is available in either a corded or cordless Bluetooth version which are both perfect for high traffic point of sale, with hands-free scanning and the included ability to read DotCode barcodes.

This fantastic all-round scanning device, ticking boxes in both retail and logistics environments depending on which edition is most applicable.

There are three editions available: 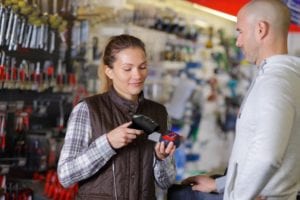