The N5S from Newland is one of the best portable terminals in its class. Utilising Android 7 OS, it comes in 1D laser or 2D megapixel variants, both of which boast the same user-friendly design and robust, rugged features. The N5S has a 4” touch screen that will adjust to any environment and can be used seamlessly with or without gloves, even when wet, using fingertips or the included stylus. The N5S has been rigorously tested and awarded an IP65 seal rating which makes it more than safe to use in wet, rainy environments.  It can also withstand knocks and drops of up to 1.5 meters, making it one of the toughest portable terminals in the Newland range.

Tilted megapixel scanner for ease of use

The megapixel version of the N5S has been designed to make repetitive scanning easier with less strain on the user. Its tilted position in the housing means the user can scan without having to repeatedly tilt the device back and forth.

Both model variants of the N5S include a super clear 4” capacitive touchscreen that can be used in almost any environment. Users can choose the stylus or their fingertips, and the screen will remain responsive even when wet or wearing gloves. 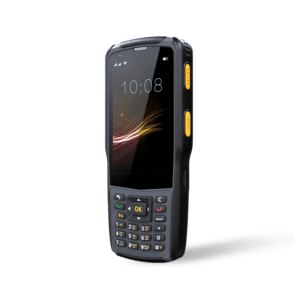 A tough and resilient portable terminal

The N5S is a great device for many reasons, but one of the standout features is its ability to take a beating. With a tried and tested drop resistance of up to 1.5 meters and an IP65 seal rating, it’s a portable terminal that can truly be depended on.

The N5S shows some real endurance. You wouldn’t think it to look at its slim design, but it contains a 4,000mAh battery that can power the device through the longest of shifts, and even has in-built power management technology to maximise efficiency.

An Android 7 full screen 5 inch touch terminal in a rugged housing. Excellent connectivity options to work at speed with confidence. Capable of withstanding 1.5m drops and sealed to IP65 standard.
GET DETAILS

A real tough 5 inch smartphone/portable terminal hybrid. Has a built in 2D barcode reader with laser aimer, very fast. Connection via a dual SIm/Dual WiFi, 4G.
GET DETAILS
BACK TO ALL Android

We’re happy to help. Call our team directly or request a callback and we’ll get right back to you.

REQUEST A CALLBACK  FIND A PARTNER