We were delighted to be able to join the St Albans City Dragons Under 14 football team at their presentation day.

As the team sponsors, we are very proud of all the boys for ending a very difficult season as league winners, with an impressive 16 wins out of 18 games.  Despite all the stops and starts during periods of lockdown, the boys have all come together and showed great strength of character and sportsmanship. 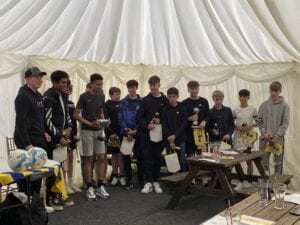 Ray was on hand to presents the Barcode Connexions sponsors award for outstanding achievement to Harry Barnes for his outstanding determination for self-improvement.  Harry has been the most improved player this season.  This was due to listening and showing great determination during training, he is a great example of what you can achieve when you listen, take on board everything you learn and transform that onto the pitch. 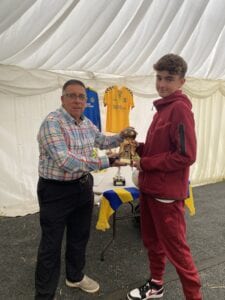 For the seventh season in a row Michael Napier won the golden boot for top goal-scorer.  In addition to being top goal-scorer in both his team and the league division, Michael has made it onto the top 20 leading goal-scorers of all time for St Albans City Youth Football Club.  This is a fantastic achievement, well done Mikey!!

In memory of Ayaan Hussain

Despite all the highs this season, the team suffered an incredible loss as one of their players, Ayaan Hussain sadly passed away.  Ayaan played over 100 games with the club and was a double player of the year winner.   His name was added to the team’s home shirt to honour a talented footballer and wonderful young man, who was taken from us far too soon.  Ayaan remains in our hearts and thoughts always.